I Got a New Bike! (& Things to Consider When Buying a Cruiser) 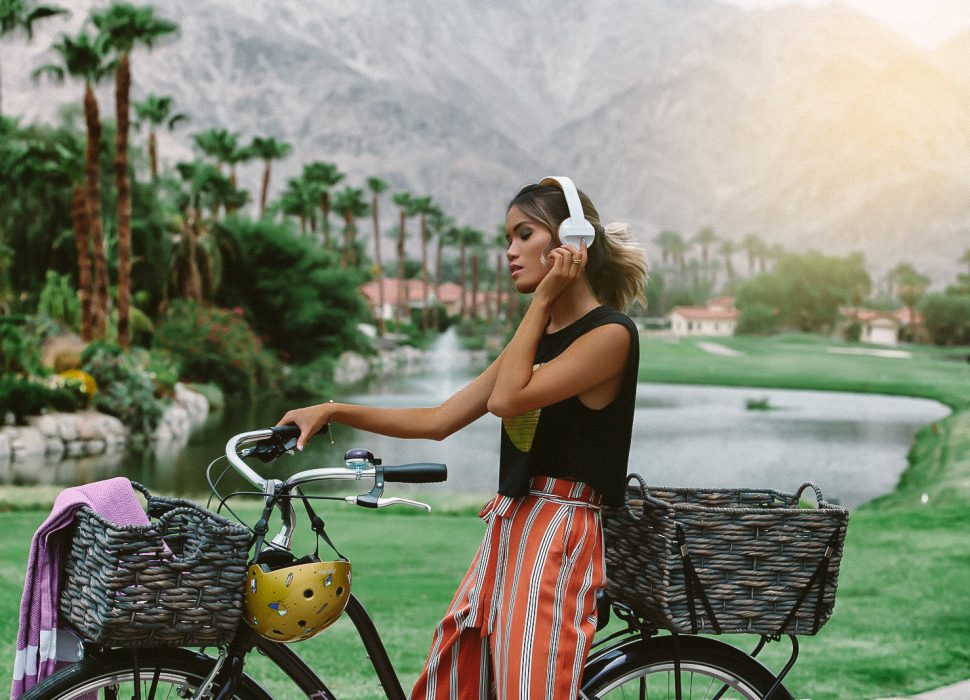 After moving into our new house, David and I talked about buying bikes to get around locally because our community is extremely beautiful and bike-friendly. We spent plenty of time shopping around and even buying bikes we ended up not happy with. It was so hard for me to choose one because I saw many pretty ones online that were Insta-worthy but when it came time to actually riding them, most were quite off in terms of practicality. Ultimately, I wanted a cruiser that was not only cute for photos but also practical. At the end of the day, that’s what a bike is for, right? It’s supposed to take you around where you need to go, with ease! 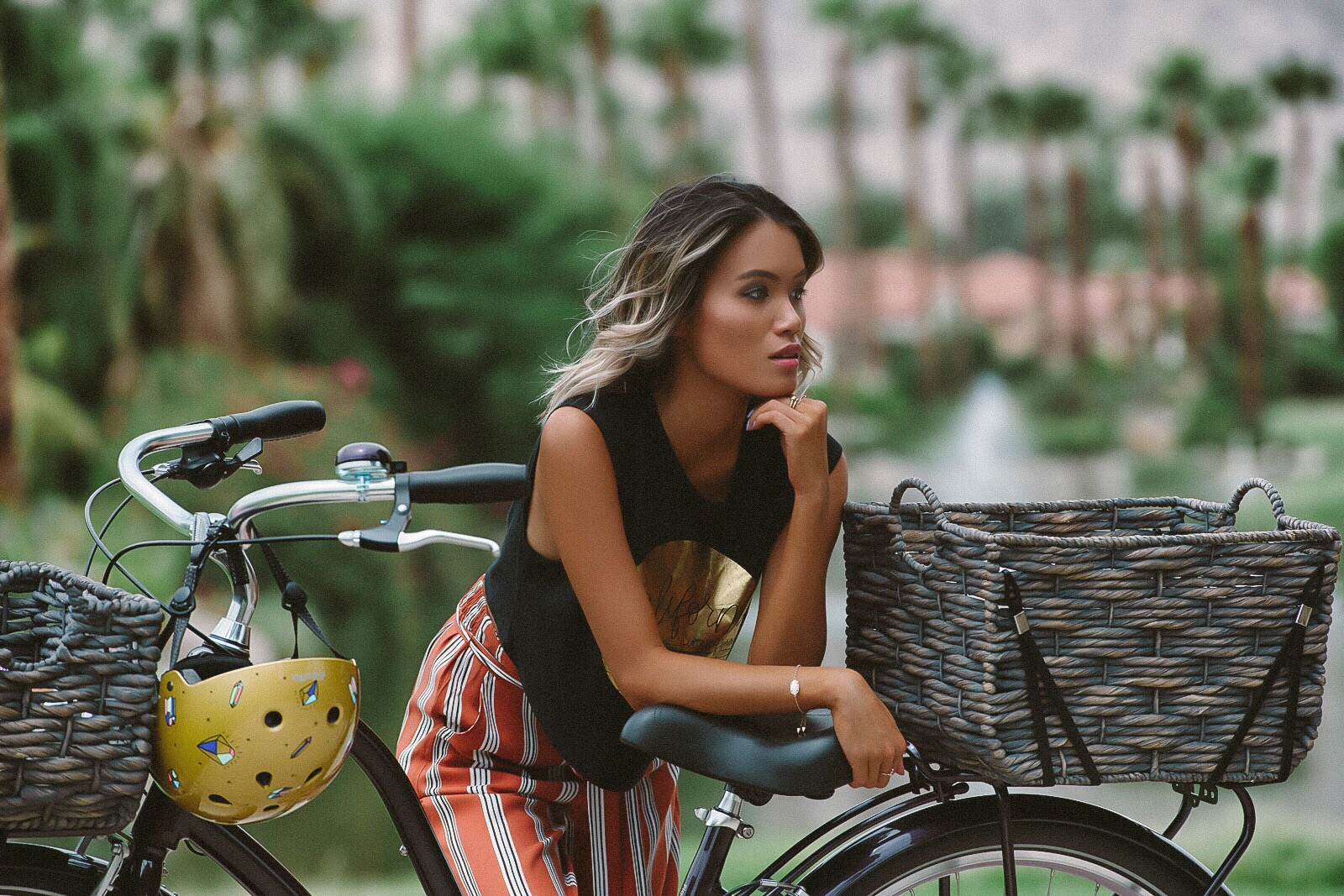 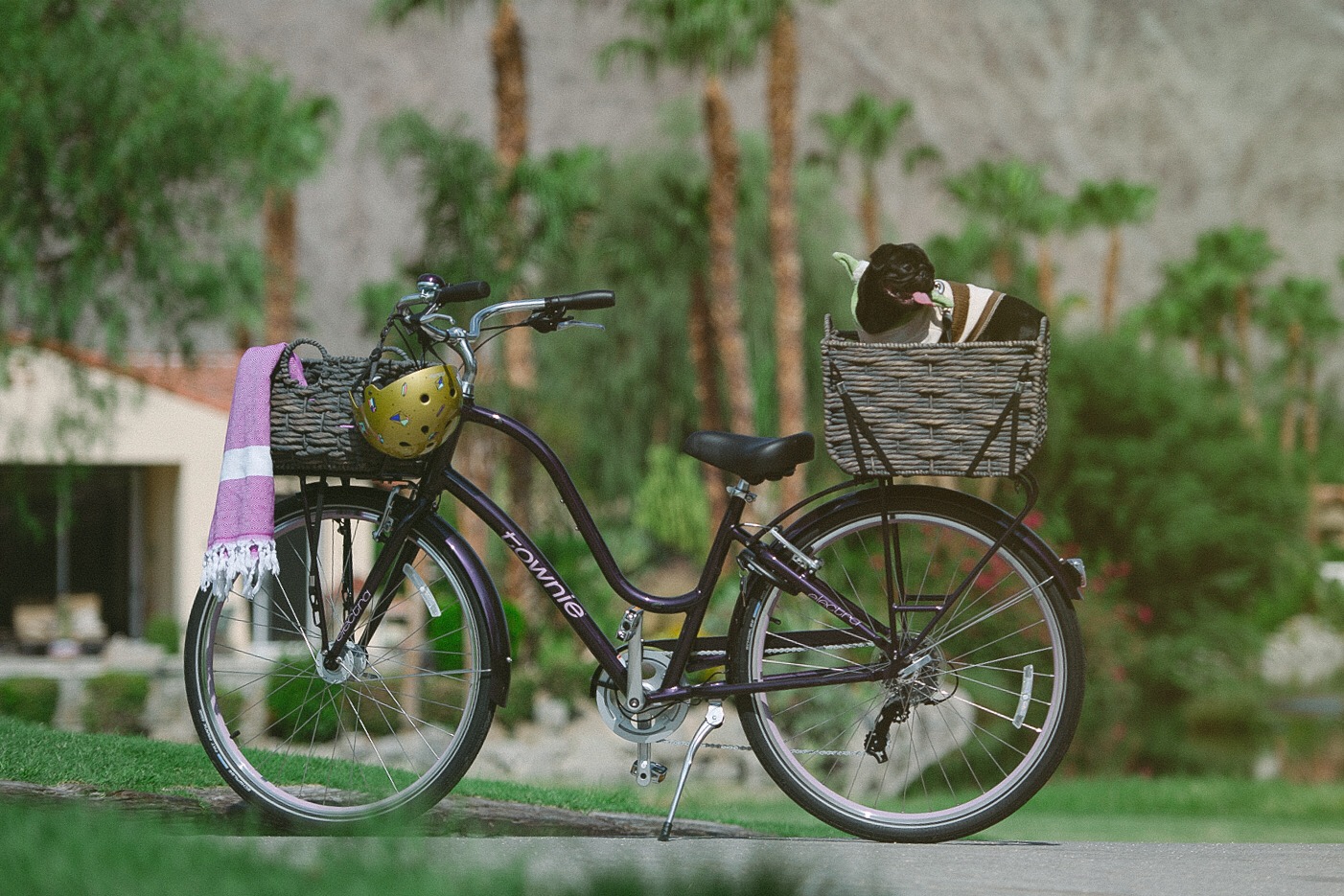 At first, I wanted something that was affordable because I thought, well, I was just getting back into biking after a decade of not biking… so a beginner’s bike should do. We went into Walmart and found the cutest yellow bike by Huffy that I thought would be the one! It even came with a cup holder and a front basket already and had a back rack if I wanted to put a basket on there and take one of the pugs on a ride. For under $150, I thought I couldn’t ask for more… so we took the bike home. After several nights of riding the bike though, I noticed that it couldn’t really handle even the slightest inclines in our immediate neighborhood. While I loved being able to back-brake on my pedals because that’s what I did growing up, David suggested that maybe a bike with gears would be a better choice for me in the long run. I also didn’t like that the light-colored wheels got dirty SO insanely fast from light riding. While cute at first, it definitely was not a practical choice. So, we brought the Huffy cruiser back to Walmart and decided to check out a local bike shop to see more options. 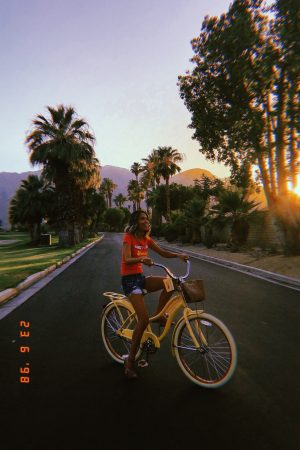 Excuse the terrible quality photo I got on my phone – it was actually the only one I managed to get before we returned it. LOL.

We went to Palm Springs Cyclery in Palm Desert and were pleasantly surprised by the great variety of bikes they had – not only a bunch of cruisers but also other types like mountain bikes which is what David ended up selecting from. I had a hard time choosing a cruiser because some would be way out of my budget ($1000+), and others would be nice but be missing certain elements of a bike that were important to me. Given the choices we had there, I was pretty set on a bright teal blue cruiser called Townie Balloon 8D EQ by Electra, but I really didn’t like that the wheels were similar to the yellow bike I had gotten from Walmart… bright, and got dirty just from the test ride. London Pickering, one of the sales associates at the bike shop, was extremely helpful and offered to switch out the tires to a darker brown color for me. I was pretty pleased with this offer, but then also noticed that this bike didn’t come with a back rack. Adding a rack to a cruiser is not uncommon, but they didn’t have any racks that matched the color exactly. I was pretty bummed about that… I mean, who doesn’t make matching bike rack colors?! Worst comes to worst though, I decided I could always spray paint a white one. After all the DIY projects we have been doing, what’s another, right? 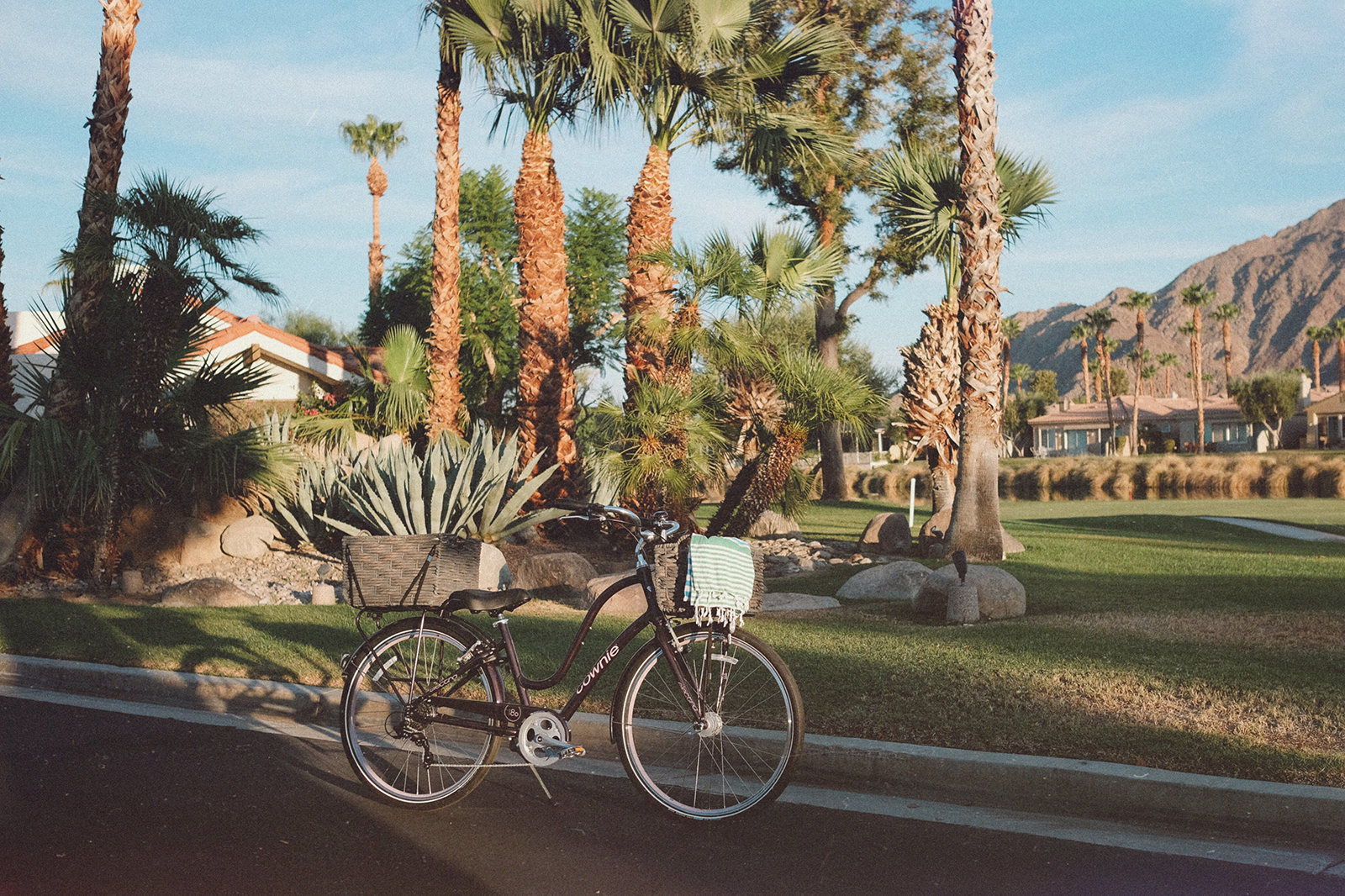 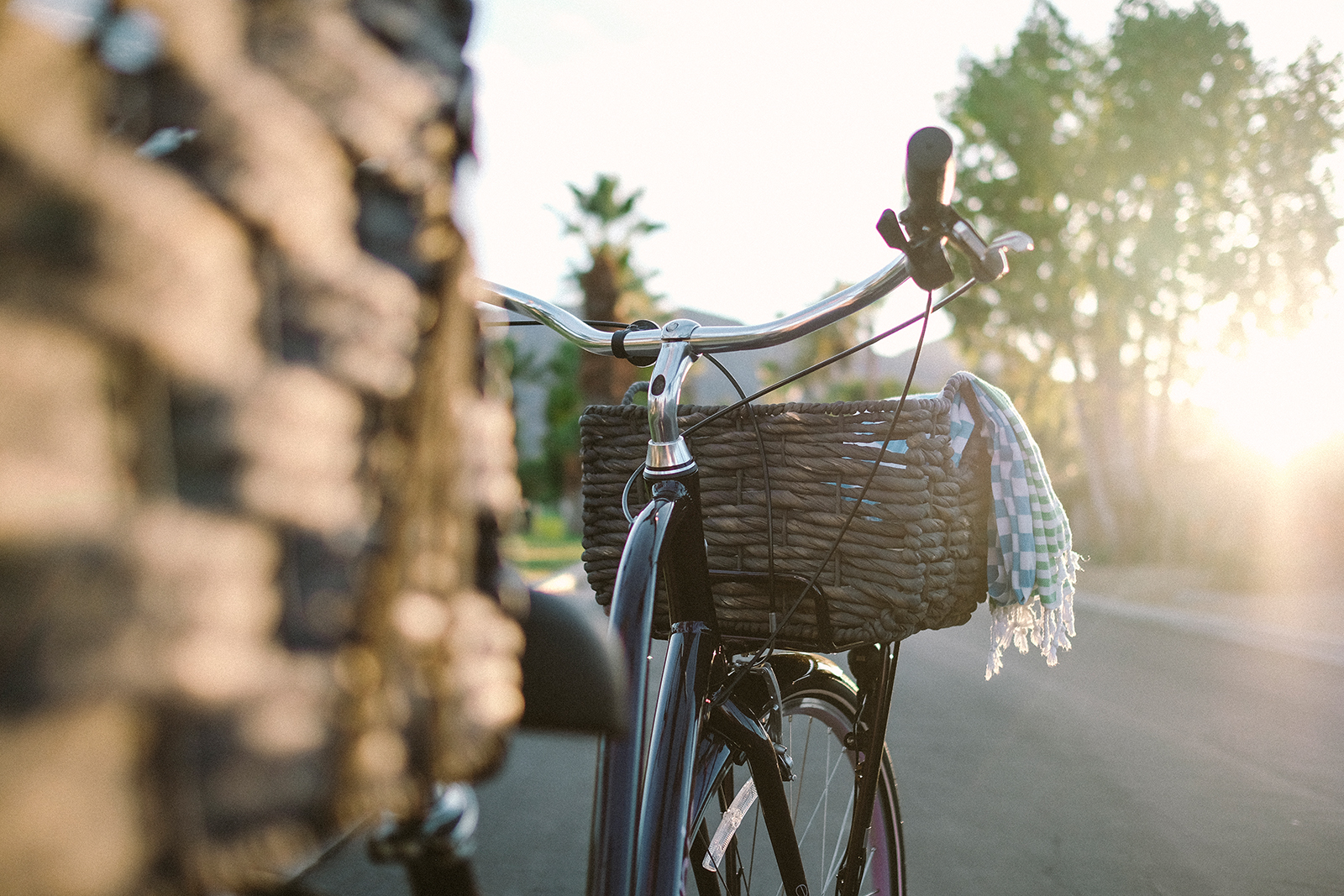 At the last minute, I asked London if they carried any purple cruisers. I always wanted one but didn’t see any on the sales floor. I’m so glad I asked because he ended up showing me another Electra cruiser, the Townie Commute 8D, which was the same price as the blue cruiser I was eyeing ($750) but already had everything with it – a matching colored front rack, back rack, and black wheels. The only downside is that the purple is a bit dark – like you might not even tell that it’s a purple color unless you looked closely. My dad thought it was black when I first showed him a photo. But given that it offered a lot more for the price, I went with it. They didn’t have the Aubergine purple one in stock, so he special ordered it for me and I got it in 3 days. In the meantime, London let me test ride one in grey that they had in store and I liked how it rode… for the most part. The seat was unusually high even at the lowest setting and we didn’t realize until later that it was because it was a men’s model! When my bike came in, I found that the women’s model fits much better and rides even easier, which is a bonus. 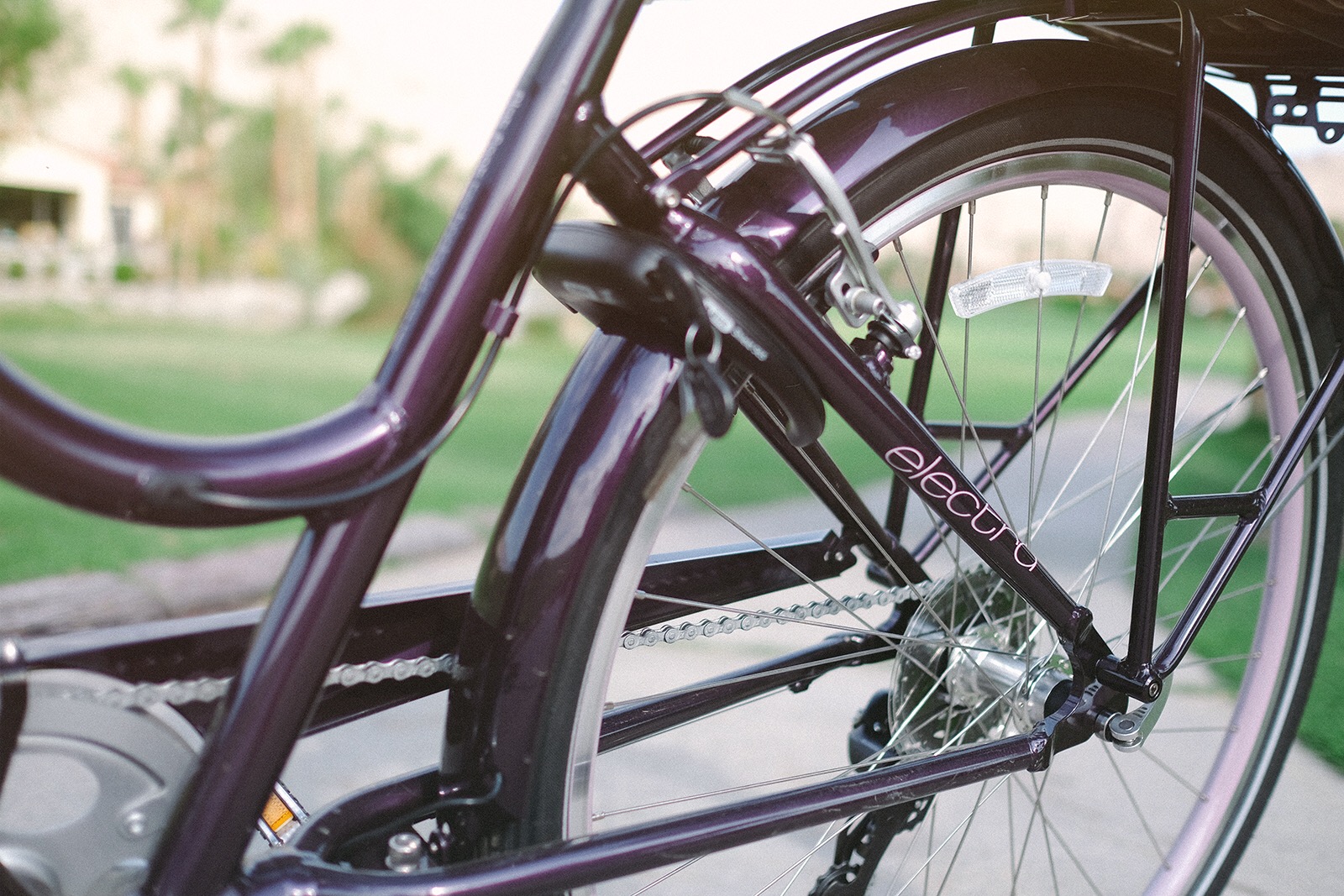 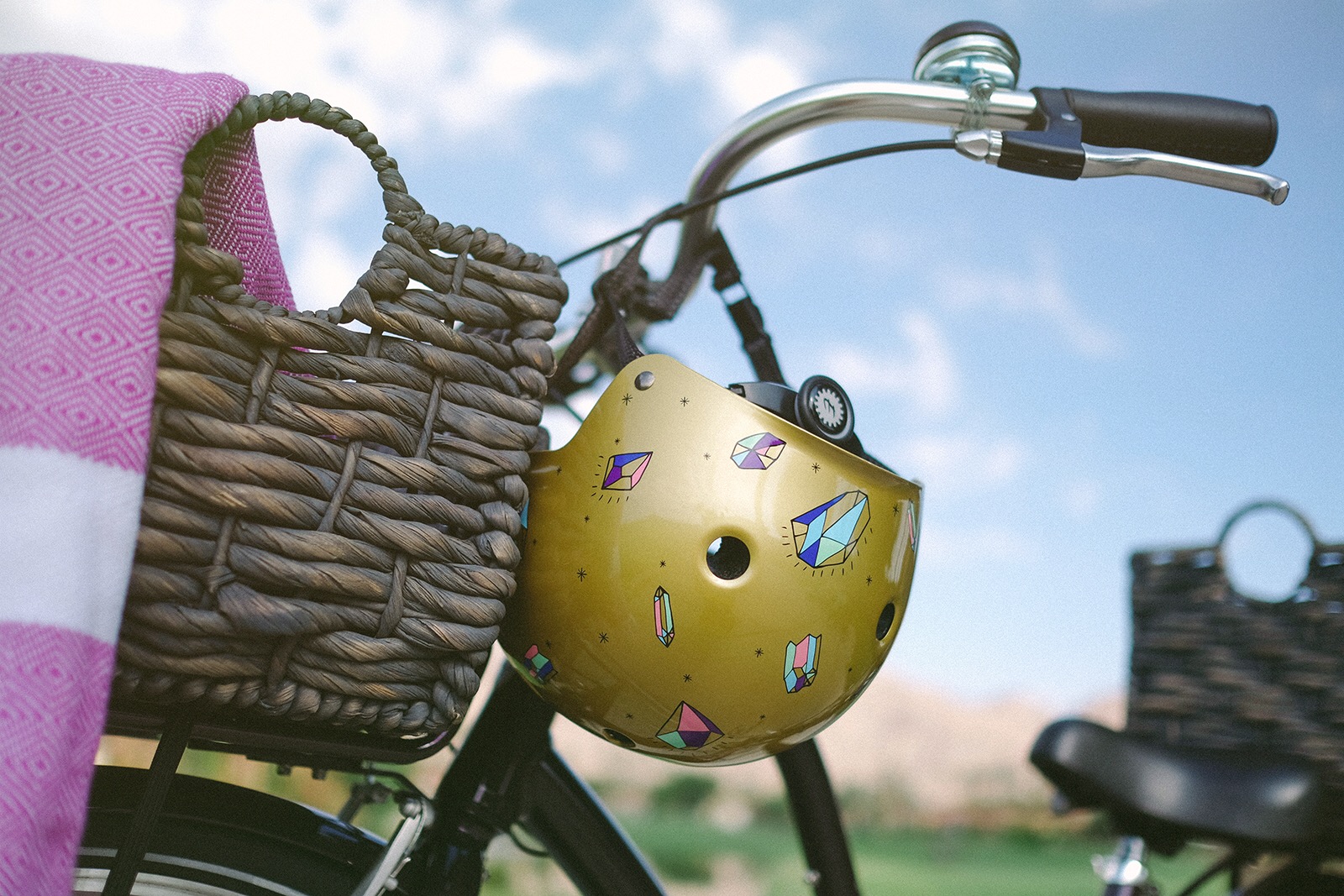 After my buying experience, I wanted to share a few considerations that I learned to be quite important during the shopping process. If you’re thinking of investing in a bike for yourself, I hope that these pointers will help you get started in the right direction!

To be honest, $750 was a bit more than what I was hoping to spend on a bike, but I don’t regret it. My Electra bike definitely has a lot more to offer than the cheap one at Walmart, and that was evident just from a quick test ride. Long story short, you definitely get what you pay for. If you’re planning to bike even semi-seriously, I think it’s worth the investment to go for a better quality bicycle.

The great thing about buying from a local shop like PS Cyclery is that they often offer perks like discounts on other items you might buy (we got free helmets, for example), and some sort of warranty. We felt confident buying our bikes knowing that if we have any issues we can always bring it in and have the guys help us out. Plus, since they’re close by, we don’t have to worry about shipping the bike back or going through other hassles to get our problems addressed. Another big perk is that the bikes were already assembled properly and we didn’t have to worry about having to put each piece together like we would if we ended up purchasing online.

As far as usage goes, I don’t plan to become a professional biker by any means. I just wanted something I could ride around from pool to pool and around the golf course in our community, and maybe to a local farmer’s market, for example. A cruiser fit my needs perfectly, and I also liked the general style of them. On the other hand, David wanted a bike that was more optimized to go on hiking trails. He opted for a mountain bike instead, and it has served him quite well so far!

After returning the Huffy bike, I had a few features in mind that I wanted in my new bike: multiple gears for practical riding, matching colored bike racks, black or darker colored wheels, and a detachable wheel for easy transport in our SUV. My Townie Commute 8D has all of these, and more without additional cost! I love that it comes with a bell and front/back lights that are powered by wheel movement when I ride. The seat is relatively comfortable, too. The color of the bicycle could be a bit brighter and lighter, but that’s minor. Overall, I’m really happy with my new baby. The hand brakes are definitely something I’ve had to work on adjusting to. Like I said, I’m used to back-braking because that’s how I learned biking as a kid (thanks, dad!). It’s pretty cool being able to shift between different gears depending on where I’m biking though – makes getting around SO much easier than riding on a single-speed bicycle. 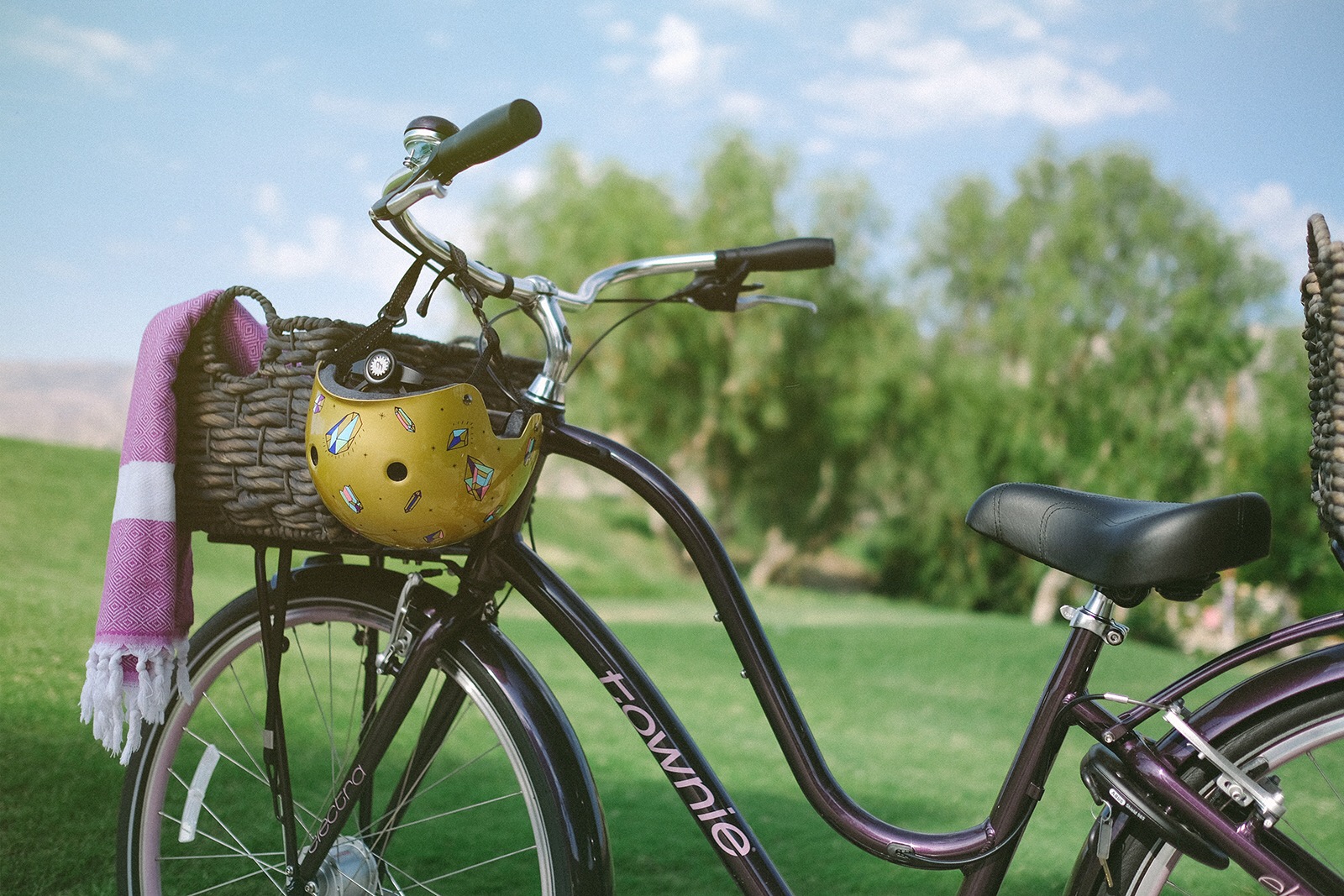 So far, I’ve only been riding around in our immediate neighborhood. I hope to explore more parts of the desert on my new bike when it cools down, and when I become a bit more comfortable with using the hand brakes. I’m still a bit nervous to ride alongside traffic on the highway, so for now, I’m just cruising through the golf course, around the community lake, and to the pool. 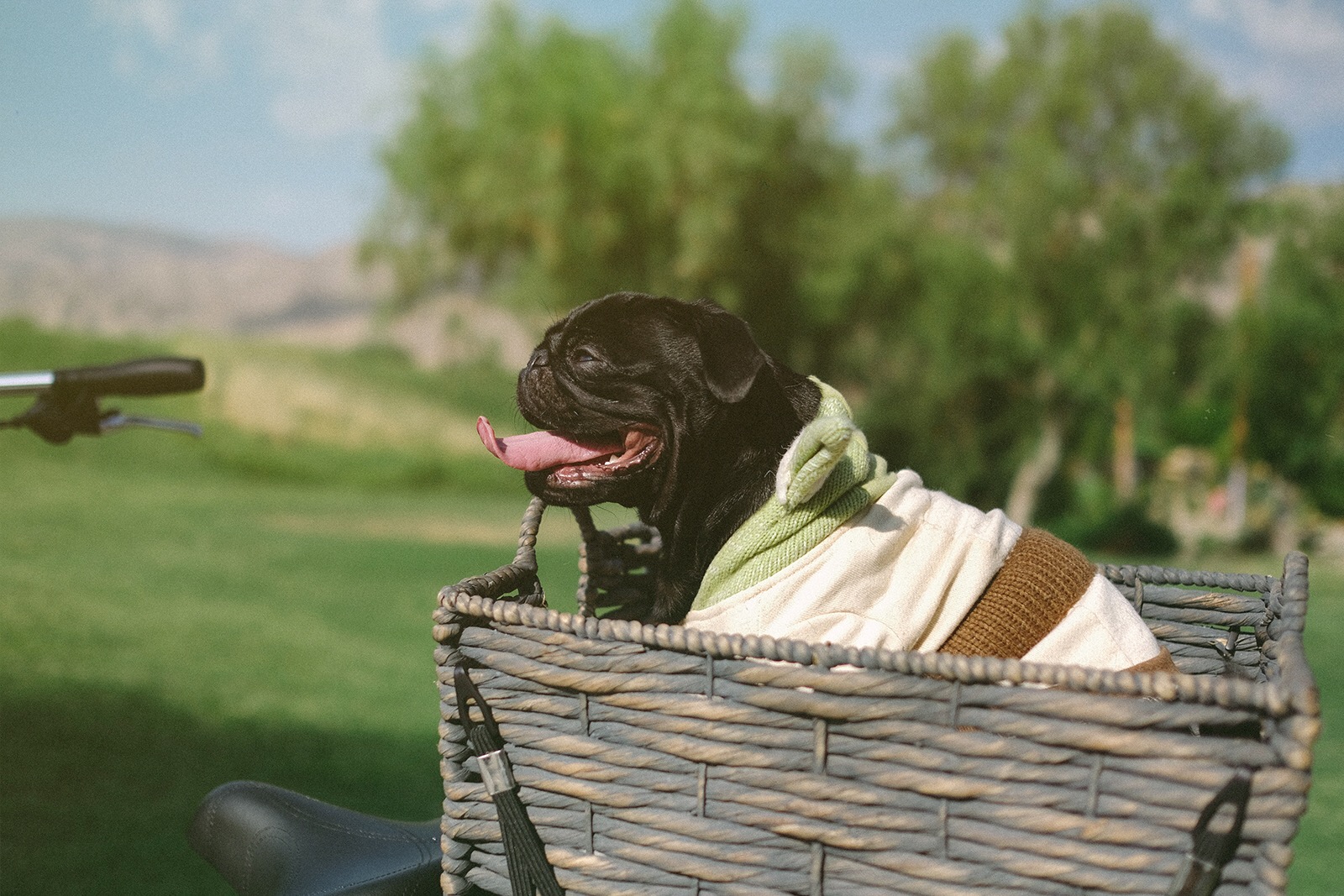 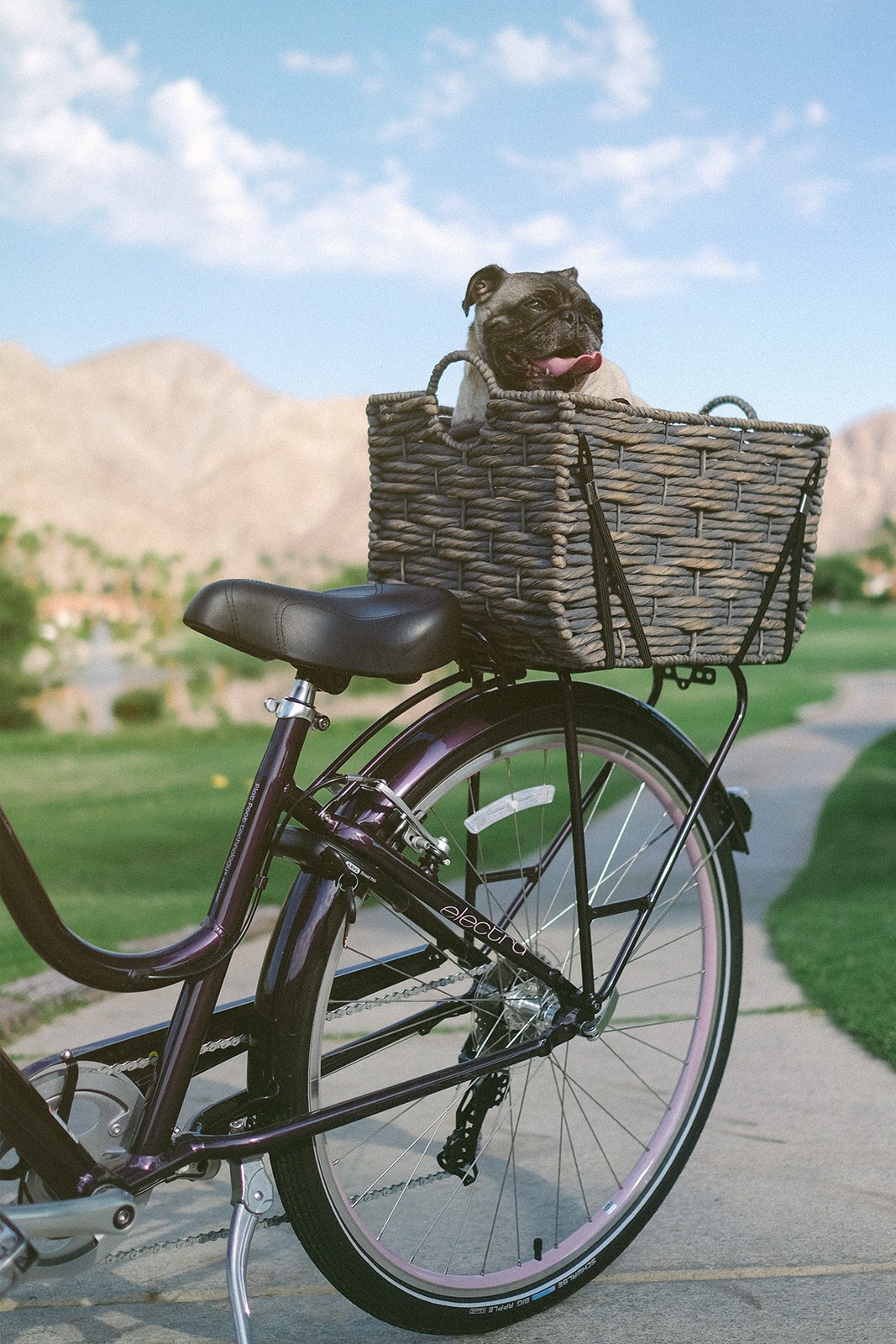 OH, and some people on Instagram have asked about where I bought my baskets – these are actually not formally bike baskets. They’re regular baskets that I found at Marshalls for a small fraction of “real bike baskets” as far as prices go. I was so excited to find that both happened to fit the front and back racks PERFECTLY! It was hard to find baskets that matched this dark purple bike, so I was pretty happy to find that this vintage grey color matches it pretty well! I’m in the works of converting the back one into a dog-friendly basket where the pugs can ride in it safely. I’ve gotten as far as securing the basket onto the bike, but still need to attach adjustable basket leashes and make my own liners for them. 🙂

Do you own a bike? Where do you enjoy cruising around most? 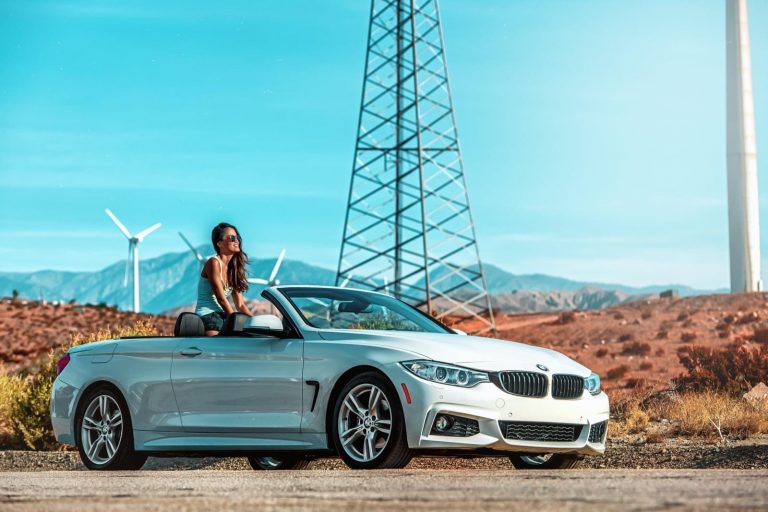 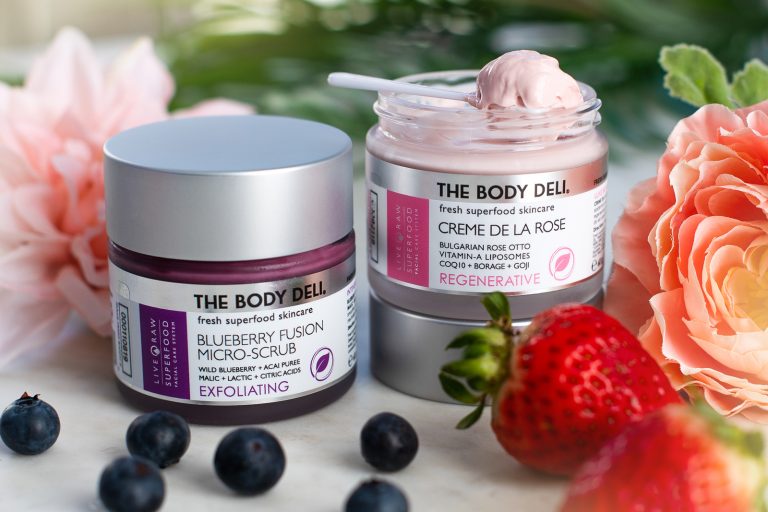 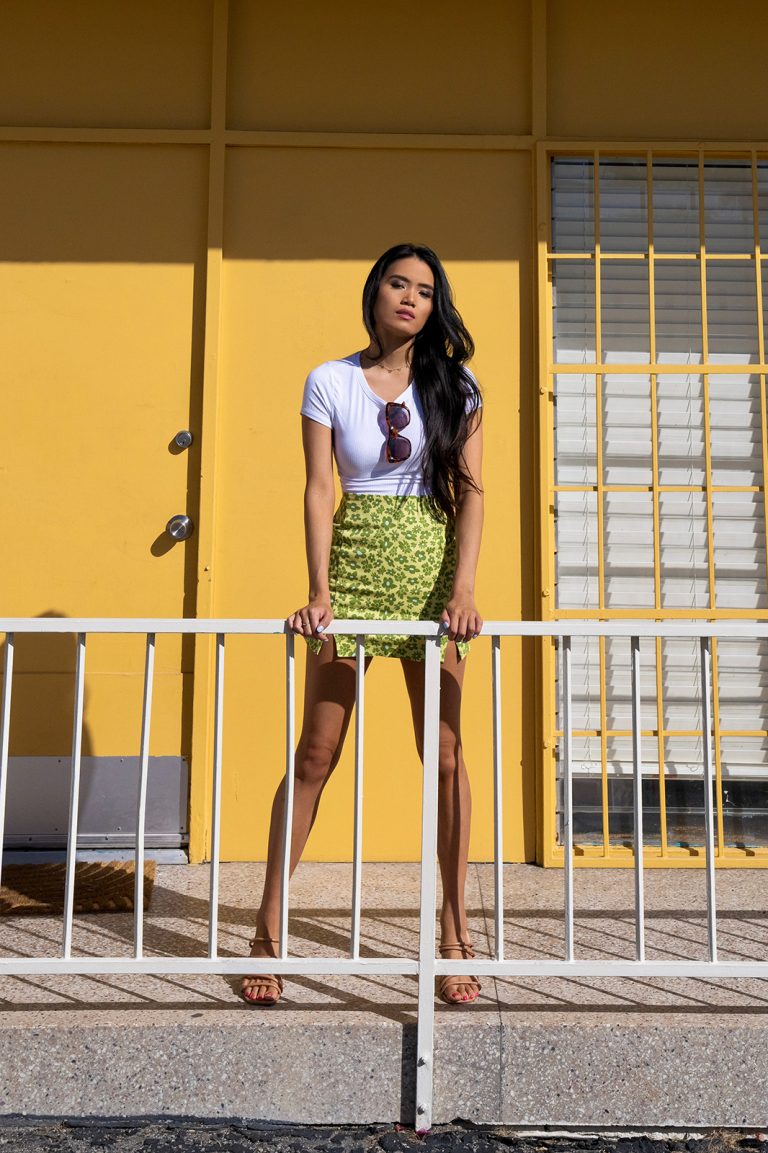 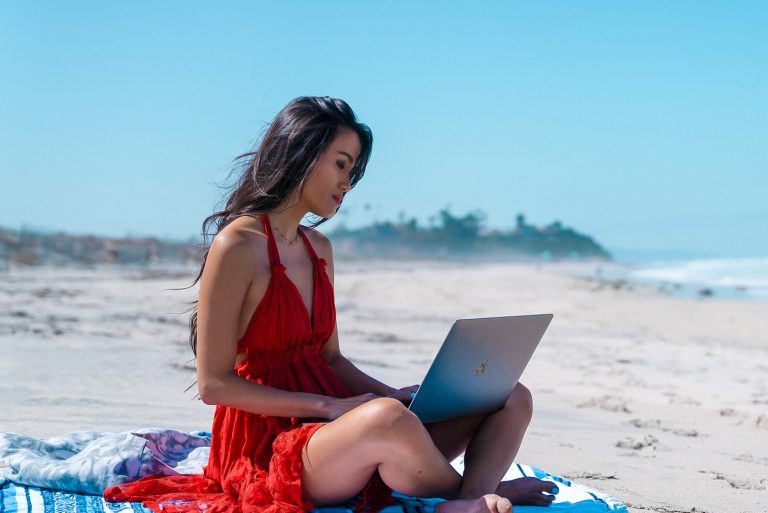